I can't remember when Mense Sense cloth pads came into being, but it was somewhere in the blurry months after the devastating 2009 Black Saturday fires. And it happened mainly as a response to the overwhelming generosity that flowed like a river in the days and months that followed.
Against all odds, my partner Nick withstood the onslaught, and we remained. One of two surviving homes on our long forested road. 23 people in our road perished including Nick's lovely Father. Nick's beautiful family home was gone, (we dwelt in the studio) and also my sister's neighbouring home had burned to the ground. We were all hard hit, and in all the outpouring of good people not knowing quite what to do, I would often return to my fire damaged, soot filled home, to find bags and bags of randomly donated goods on our doorstep - as there weren't many doorsteps left to recieve them, ours was well visited.

Within months, I had accumulated 31 toothbrushes, 11 hairbrushes ( I hadn't even lost my hairbrush), boxes of shampoo and odd cosmetics, and boxes apon boxes of disposable pads. I had close to half a cubic meter of them! Seeing this all en masse, it deeply registered that all this must end up in the bin. This amount of preemptive rubbish hit me like a tonne of bricks, and suddenly gave me new ambition. I guess reality back then felt really hard, and sharpens your resolve so I decided then and there to no longer contribute to landfill in this one small way, even though at that time I had never tried cloth. I also hoped doing something for the planet might lessen the chance of another natural disaster, some sort of a bargain with Mother Nature. I sat down and did the maths, of both how many pads I had already used and how many I was still destined to throw out. It's funny what a natural disaster will bring out in you.

I had previously purchased a weird looking cloth pad many years before, which still sat brand new and untouched in my top draw, waiting for me to get over my recoil of my own blood. I pulled it out, tried it for the first time. I was an instant convert, though it needed some refinement. I then wondered why it had taken me six years and a natural disaster for me to be a little more level with myself and my body. Anyway, in my newly discovered, and somewhat surprising excitement for the cloth, I sewed myself some more pads, researched absorbent materials like bamboo, refined my pattens, kept on sewing and began giving pads away to my girlfriends. Soon orders started flowing in. Word of mouth spread and to my delight, a little business bloomed out of the messy painful trauma that was my life. I felt I had found a little bit of meaning amongst of all this chaos of disaster. Oddly, pad making became my happy place and gladly gave me a new focus which meant I had less brain cells devoted to thinking about fire. I never imagined I'd become a pad lady, it's kind of embarrassing. I just say I'm in women's health. But it feels totally right to be doing this and I'm glad to have found something that services both the planet and women. Mum told me that my Gran had once worked in a pad factory. Now, I would have never known that unless there'd been a bushfire... 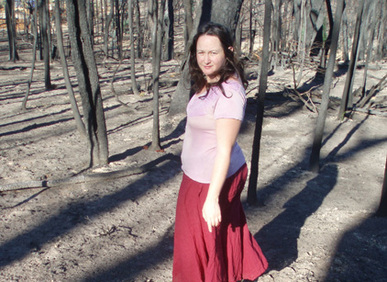